This year's 70th conventionVDVA took place in Scandinavia, for which more than 50 participants* met on Friday, 26.7.19 at track 8 of Hamburg Central Station to travel on the Vogelfluglinie to Nyköbing. Unfortunately, the railcar was not transported. Our first destination was the Skjoldenæsholm Tram Museum, which took us from Nyköbing to Ringsted by two youngtimer buses. After a delicious Danish dinner in the golf club at the museum we could visit the otherwise inaccessible halls. In the new Hall 4, meter-gauge cars and buses can be handled. In the huge Hall 3 a huge stock of trains, buses, spare parts and all sorts of contemporary witnesses around the historical public transport is collected. Afterwards we shot a rune with five different museum cars in the blue hour. The route was illuminated with numerous light bulbs on the overhead line. 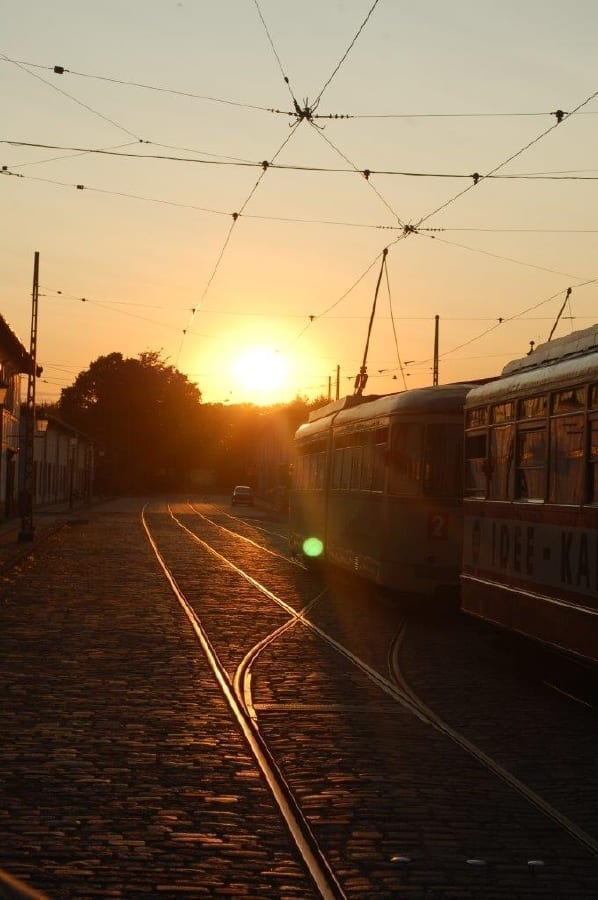 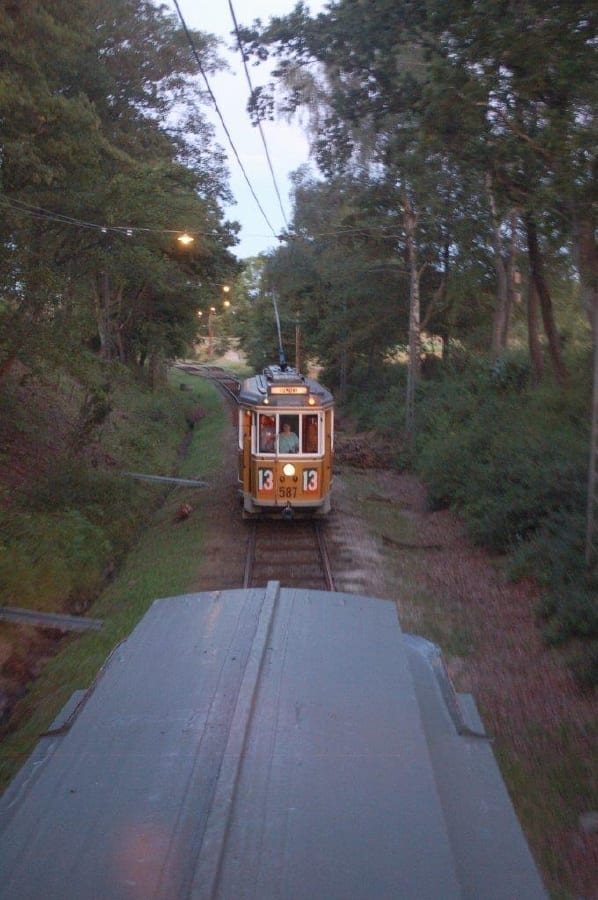 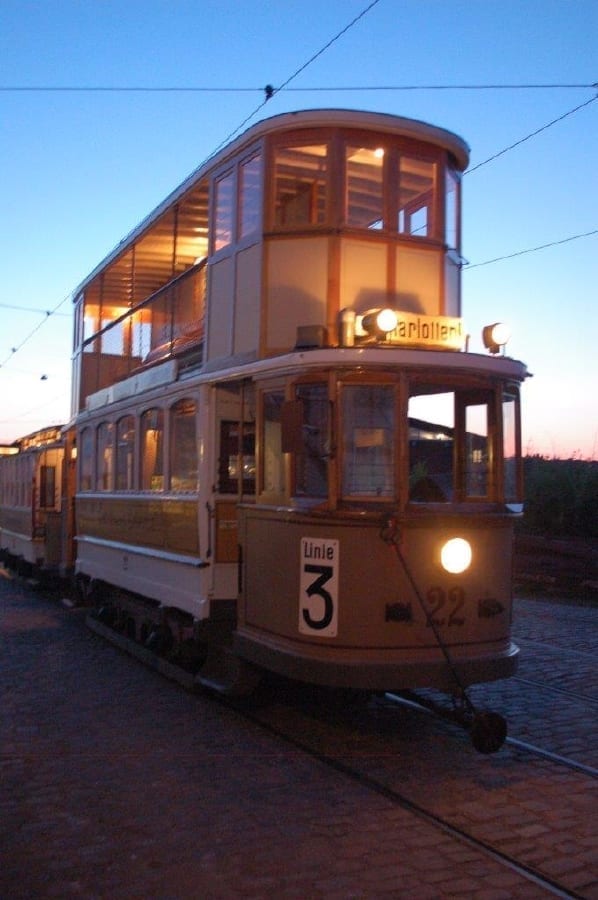 Fig.4 Cavalcade of 5 sets for VDVA in the final loop Eilers ↴ 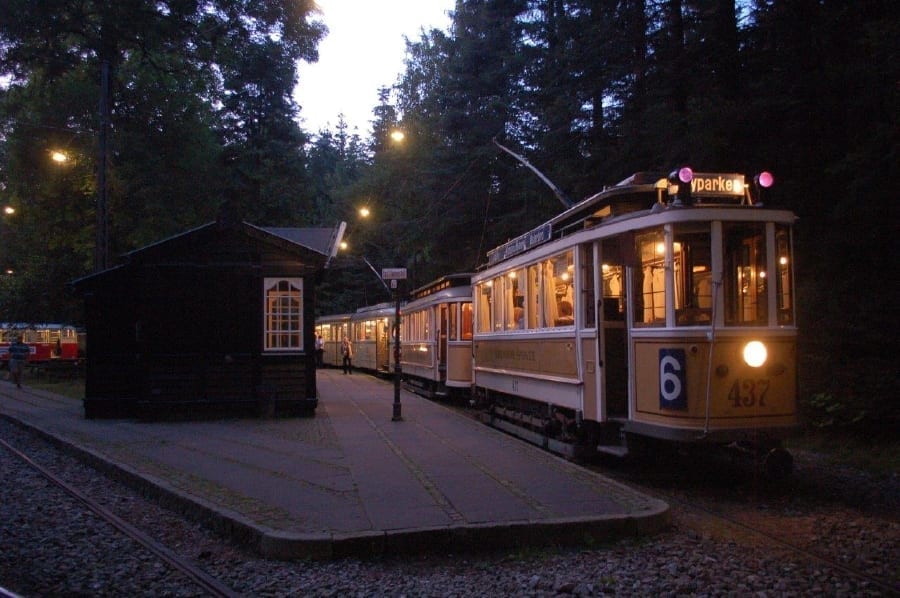 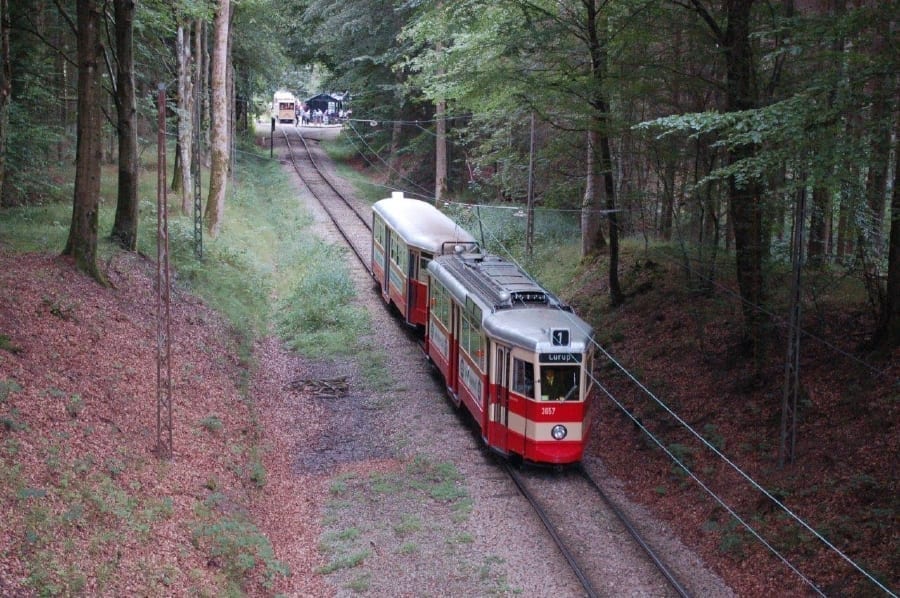 Fig.6 The meter-gauge Flensburg 36 picks up visitors at the car park ↴ 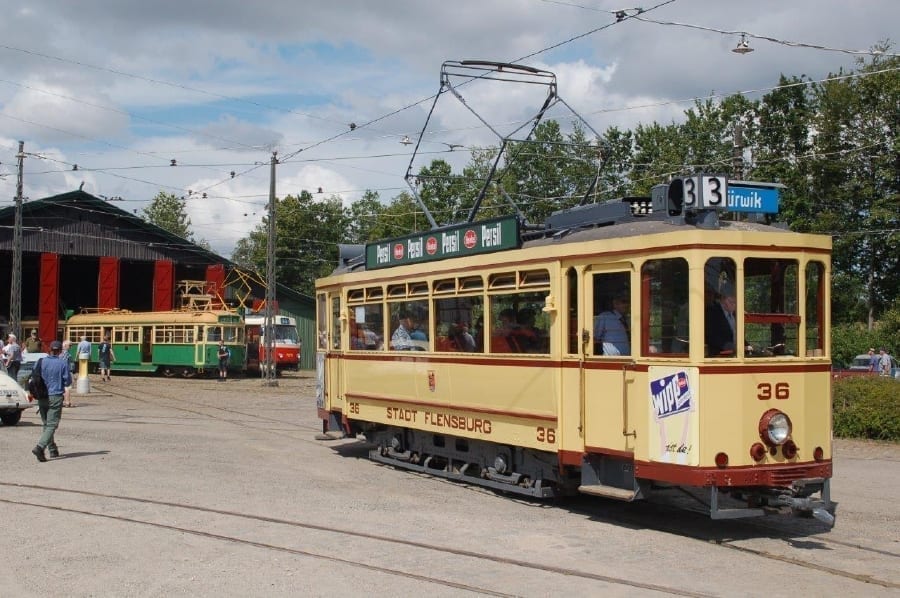 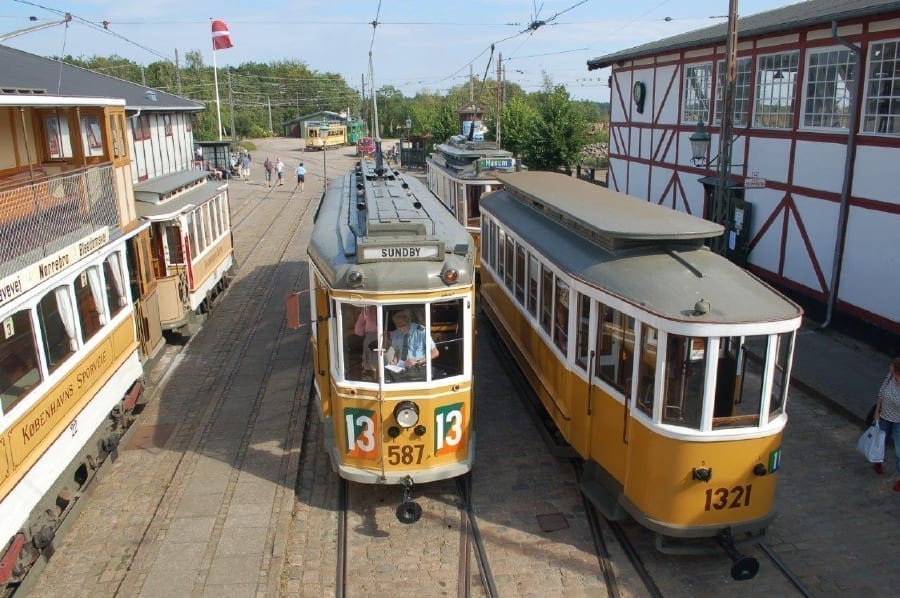 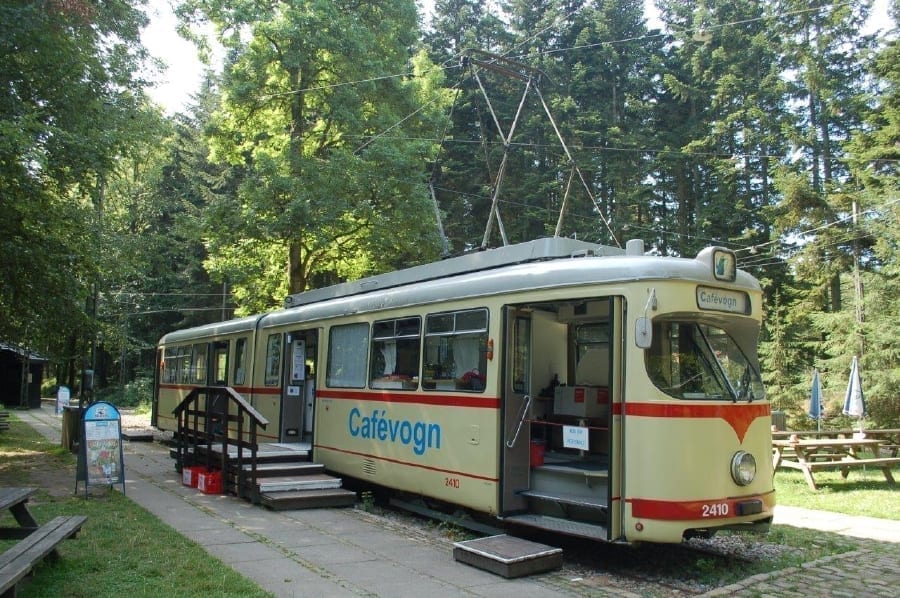 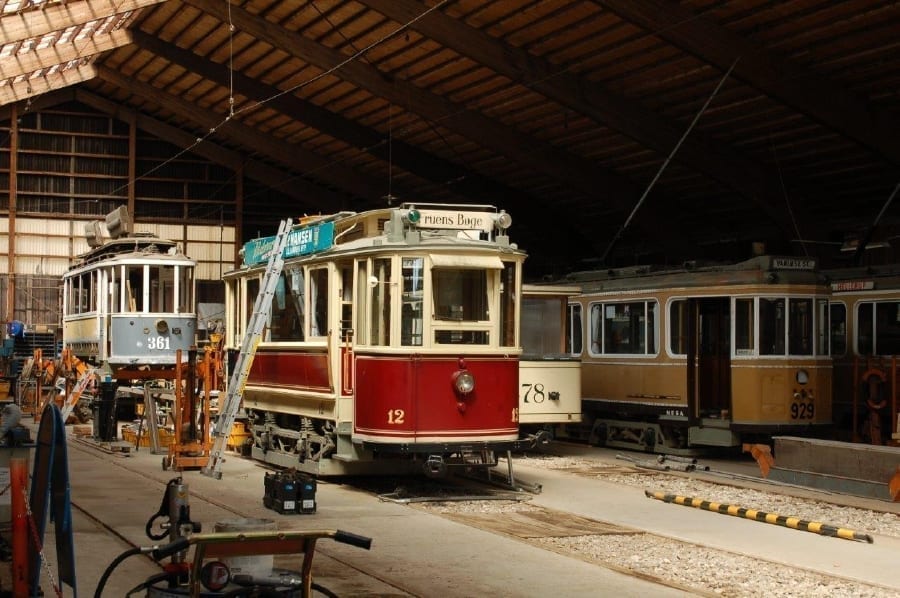 On Sunday morning rain started as we drove from Ringsted via Copenhagen and the Öresund Bridge from Denmark to Sweden, more precisely to Malmö. The rain stopped when two historical buses drove us to the museum line: in a three-quarter round around the city park two historical two-axle vehicles drove, which triangulated besides at the depot entrance as an alternative. The normal-gauge track offered a number of pretty photo motifs in the returned sunshine. In the late afternoon we continued by train to Göteborg, where the blue and white trams greeted us.
Monday started with a city tour on foot, with the public transport ferry zigzag across the Göta River and with the tram back to the hotel. At noon the group met at the museum depot Gårda, which was filled with well restored railways. By train 208+336 we drove all over Gothenburg.

The city offers amazing differences in altitude, which are well mastered with the powerful motorized vehicles. Before a second round we were led in three groups through the eight-track, full museum depot, whereby here also some buses and a trolleybus find place. Will any of the Ansaldo railcars ever find their way into this rich collection?

With the Mustang team 15+423 we went over the high bascule bridge, which is replaced by a lower lifting bridge under construction, into the north town. Back on the eastern side the line leading north to the loop Kortedala was used, which also has some tunnels through the hard rock.

On Tuesday morning we left Gothenburg and drove through the pine and birch woods, wide grain fields and romantic lakes with a change in Katrineholm to Norrköping. There we were picked up by car 69 of type M97, whose roots are in Duisburg, at the station. We drove the entire net with the two lines 2 and 3 and our driver Willy Forsström organized us favorable photo stops, whereby the sun showed up more and more. In between we visited the museum with the unfortunately not in the passenger traffic registered vehicles, which would have had for our large group however also clearly too little capacity. However, they were set up as photogenic as possible. This was followed by a walk through the depot hall, in front of which the party car, which was still the most similar to the original state with the original front of Düwag and without the low-floor middle section as a six-axle car, and two other museum cars shone in the sun. Before the journey to Stockholm we had enough time at the station to take pictures of other planned vehicles. Due to construction measures in Stockholm, we had to change to the hotel once more, but were welcomed by a tram friend of Stockholm's in Södra station and led to the hotel.

Fig.15 Tw 68 you can hardly see his Duisburg origin in Norrköping at ↴

Fig.16 Our special train Tw 69 at a photogenic stop in front of a typical Swedish house ↴

Wednesday began with a special trip on the Djurgardslinjen, line 7 of the Stockholm Sparvägn. This line has an eventful past: closed down in 1967, reopened as a museum railway in 1991, reopened as a regular line in 2010 and in the decided but not started extension to the Lidingö Bridge with a great future. We drove with the "Mustang"-Tw 331 from Norrmalmstorg to the loop Waldemarsudde, which leads steeply around the Italian embassy. After a visit to the depot, which is currently being enlarged, the journey continued with Tw 76. The afternoon was free for individual design: Lidingö, Tvär or Nockeby tracks were recommendable destinations. All the lines wind their way through the archipelago cliffs with their steep gradients. The long Tvär railway crosses the Mälarsee on high bridges.
On Thursday a Volvo B58 ex SJ1120 built in 1970 by the bus association picked us up at the hotel to drive us all over the city or better said across the islands. We visited the viewpoint south of Slussen to have a view of the old town. Later we followed the planned way of the extension of the SL 7 to Lidingö. 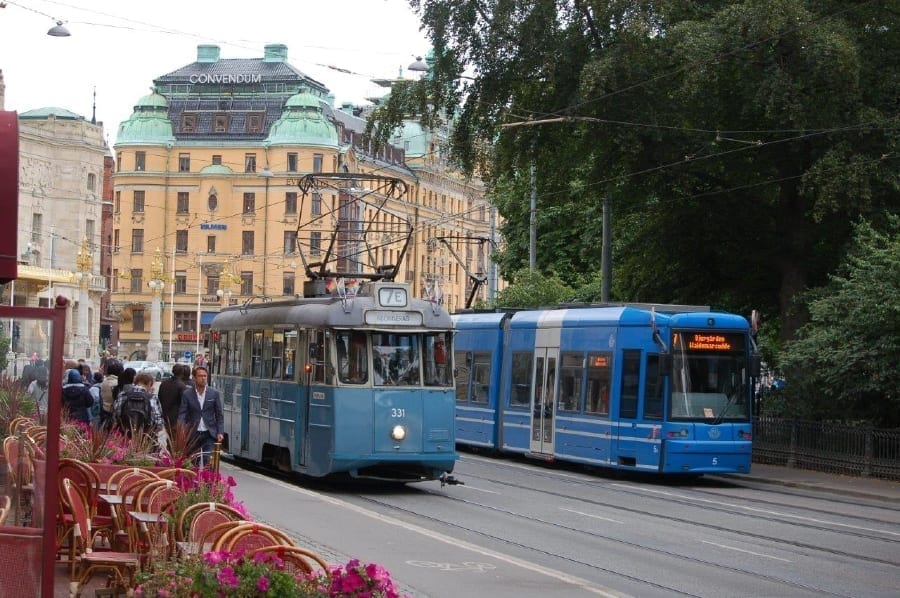 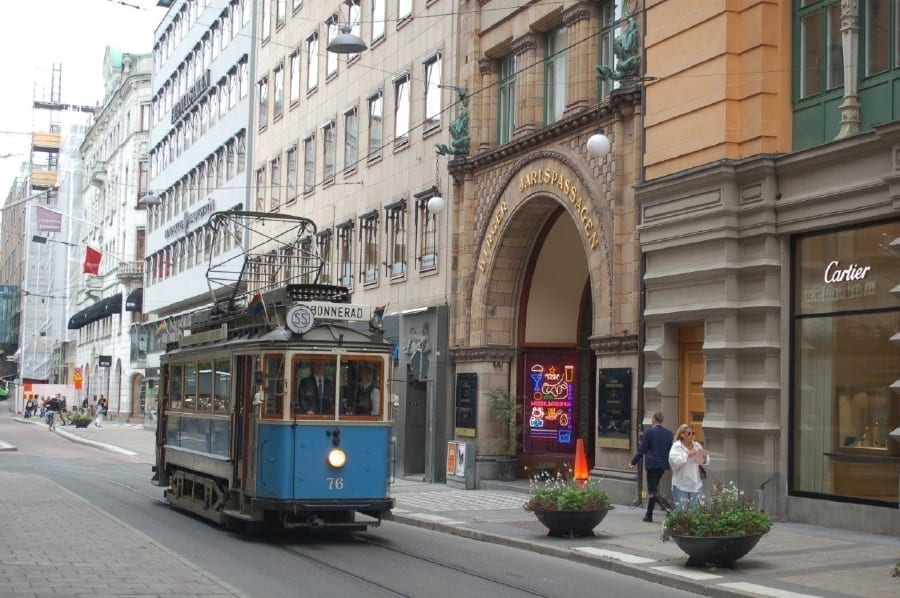 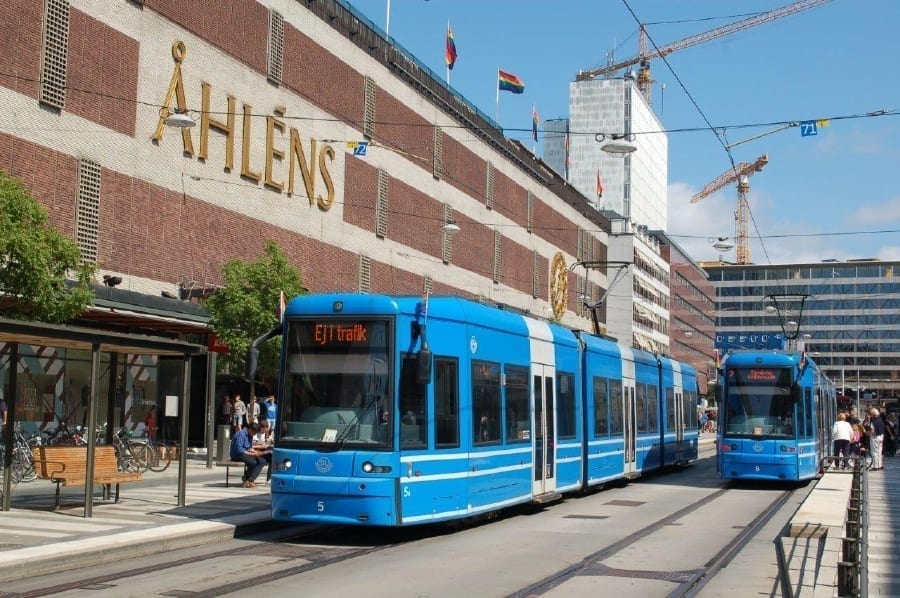 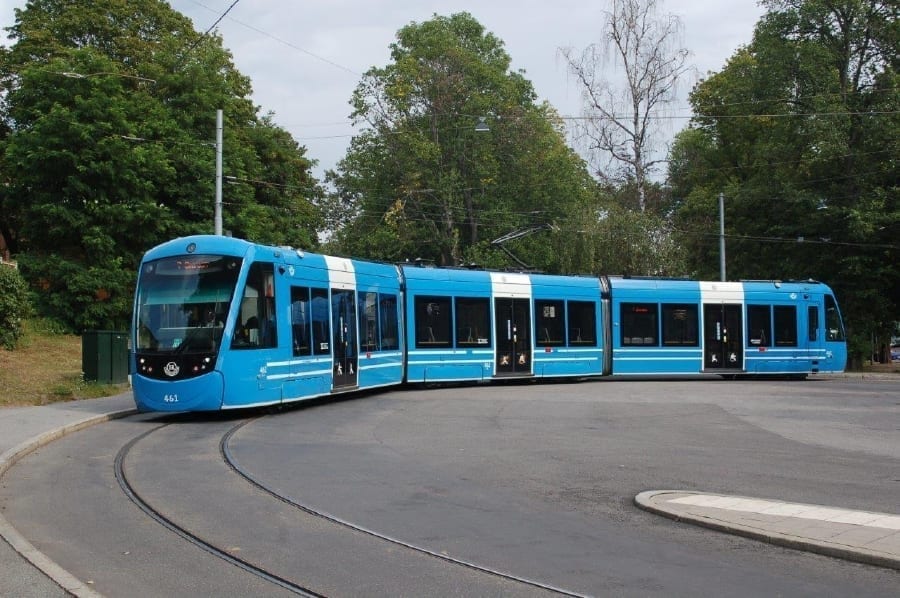 In the afternoon we visited the sixth and newest depot including the workshop of Tunnelbanan.
(subway) in Norsborg. The depot, which only opened at the end of last year, made a clinically clean impression. Three brand new four-part C30 half trains from Bombardier were tested for their first use. Five of these trains have space in the maintenance area. The vehicles to be parked pass under the workshop area coming from the stop, in order to spend the night and be cleaned underground behind the car wash after a 180° curve under 15 m of rocky ground on currently eleven parking tracks for two trains each in three tunnel halls. 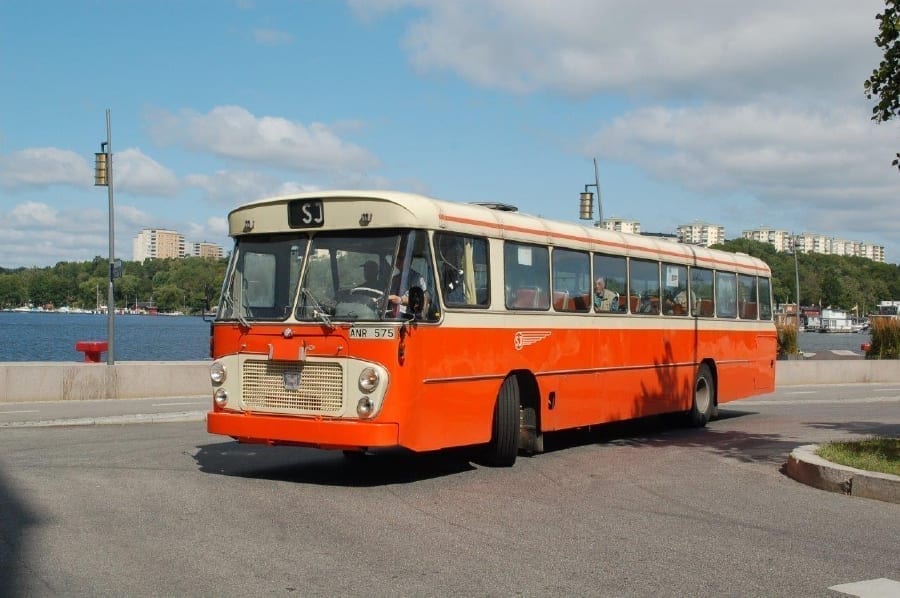 Fig.22 Terminal of the red line T13 with underground exit of the depot Norsborg ↴ 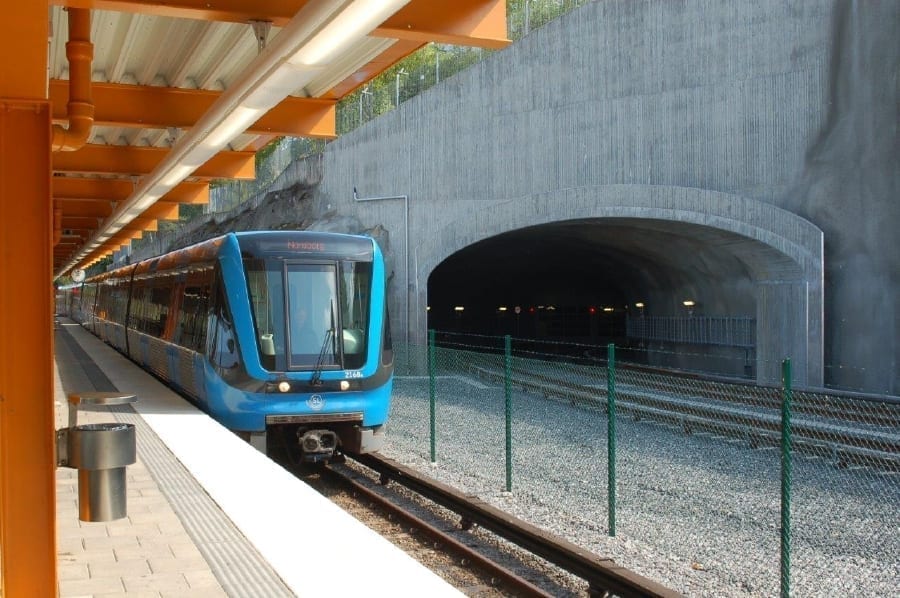 The rock caves are also heated. A second 180° curve is then used to reach the workshop. There is already a shell with the option of four additional stabling tracks corresponding to another tunnel hall and a reversing loop.

Fig.23 Group photo in the most modern depot of Tunnelbanan, Norsborg ↴ 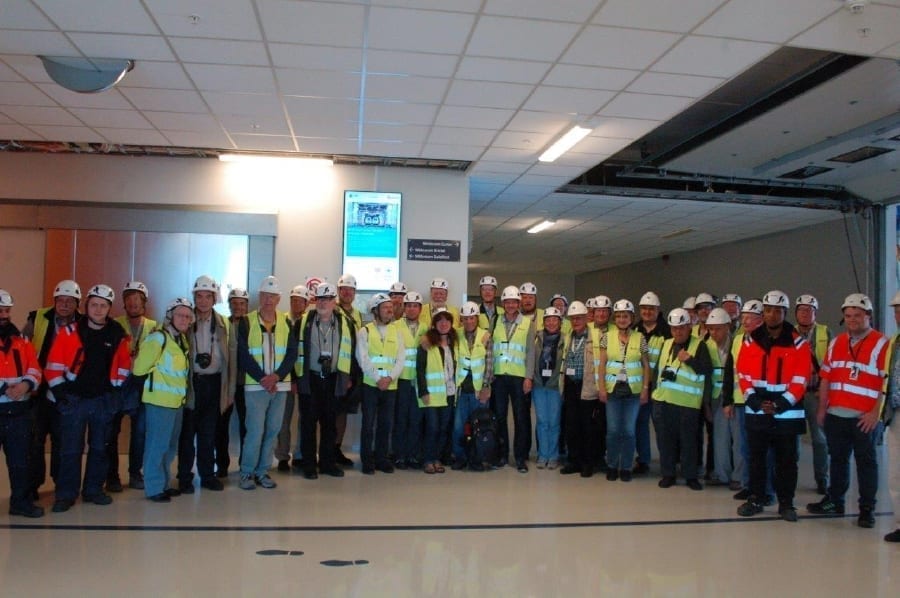 The next day was at the free disposal, so that one repeatedly encountered the association participants on one of the suburban railways: the Lidingö Railway, which leads from Ropsten to the island of the same name over the picturesque bridge, and from whose terminal station Gashaga Brygga one can go by ship back to the centre. Or the Roslagsbanan, operated with the rare gauge of 891 mm, which branches out to the north. Or right at the hotel, the Nockeby-Bahn, which winds its way through Alstens to the name-giving suburb. Or with the Tvärbanan (transverse line), which bypasses the centre of Stockholm tangentially and crosses high bridges.

Fig.24 Tw 554 has left the island Lidingö and reached the terminal Ropsen ↴ 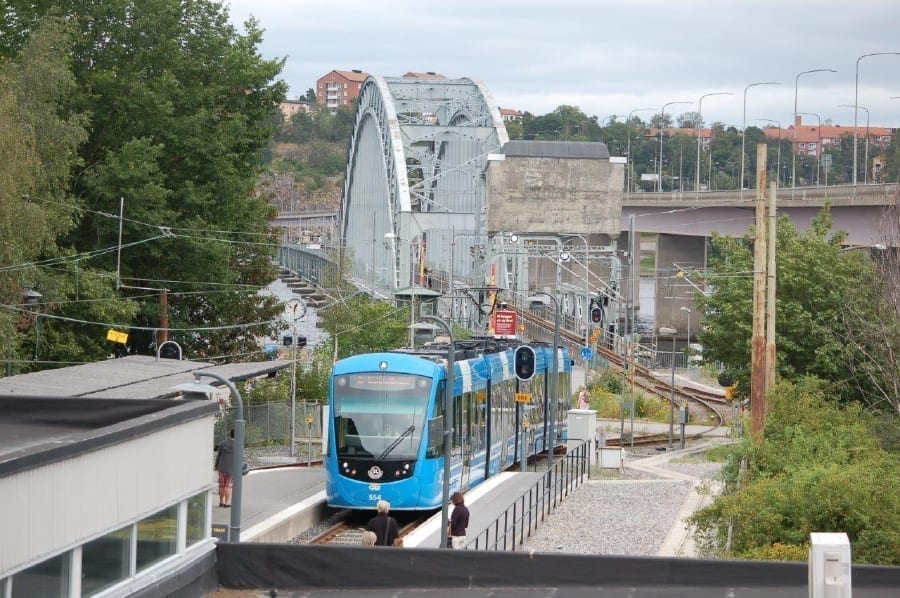 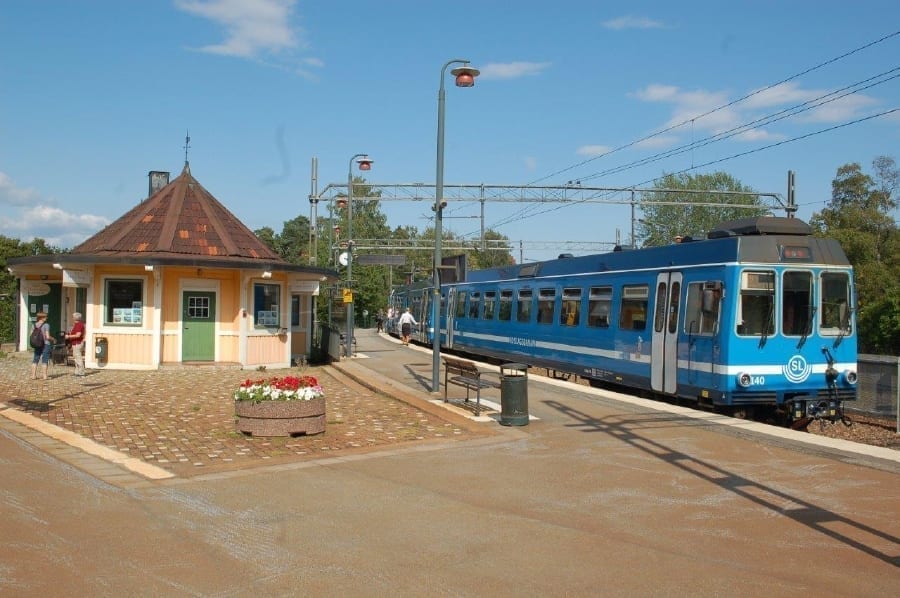 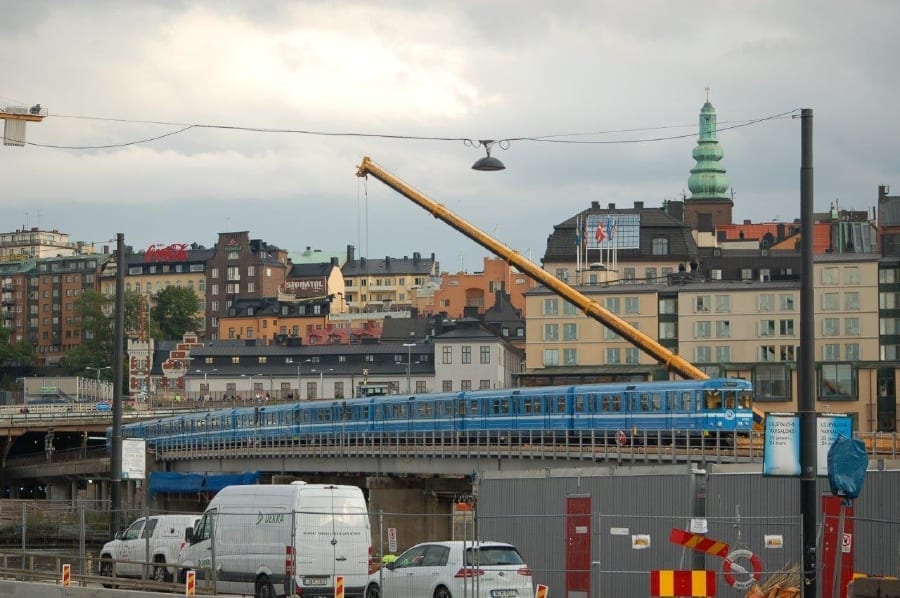 Fig.27 L25 of Saltsjöbanan ready to return from Saltsjöbaden ↴ 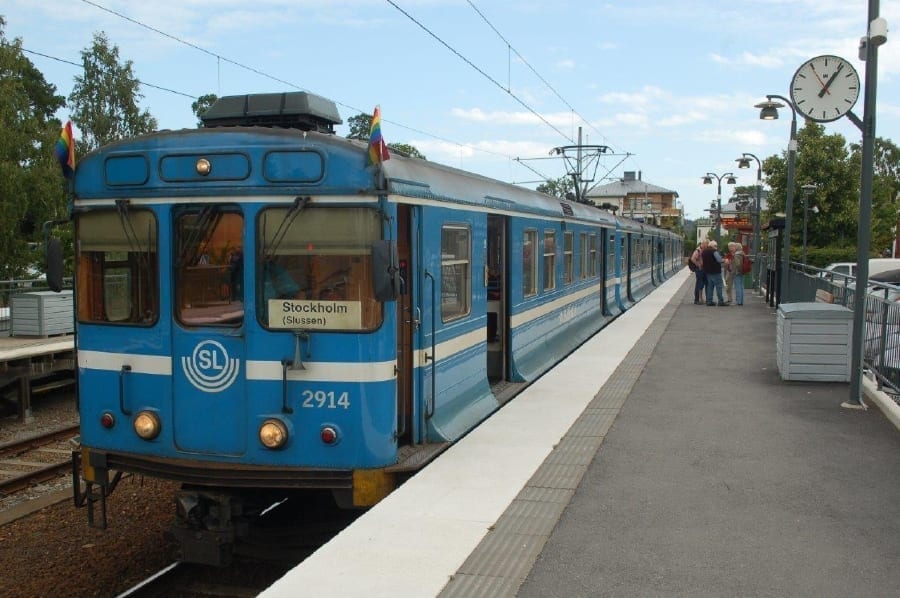 Bombardier Type A32 trains are used individually on the Nockeby and in double traction on the Tvär line. On the latter line we also encountered individual CAF double attractions (A35). Or the Saltsjöbanan, which leads with former subway cars to the southeast with magnificent views of the archipelago. On the cars that operated on L25 in double traction, on the short L26 in single traction, the middle door was removed and replaced by an additional compartment. In the evening, after a Scandinavian buffet, the general meeting was on the agenda.
The program on Saturday took us to the tram museum in Malmköping. From the station in Flen a Leyland double-decker bus picks us up, which was formerly in the service of the SJ. Then we were able to travel the idyllic route with three historic Stockholm trams: Views of lakes alternate with narrow gorges through which the route meanders. We also got an insight into the workshop, where a wooden railcar of the Lidingö railway was being restored. The old round engine shed did not offer enough space and equipment. In two 60 m long, 5-track halls we could admire on the one hand the restored but not in service vehicles and on the other hand the "work stock", because the museum has made it its business to protect all historical Swedish cars, of which one becomes aware, from being scrapped. With most beautiful sunlight of this late August afternoon it went then back to Stockholm.

Fig.28 Dan Erik Göransson led and drove us well in Stockholm and Malmköping

Fig.31 Group photo at the depot of the museum tram Malmköping ↴ 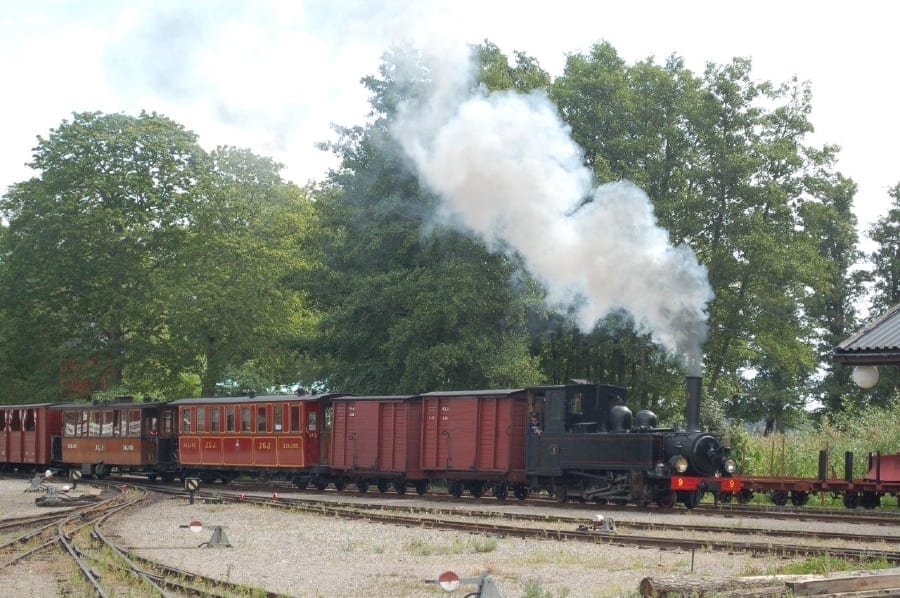 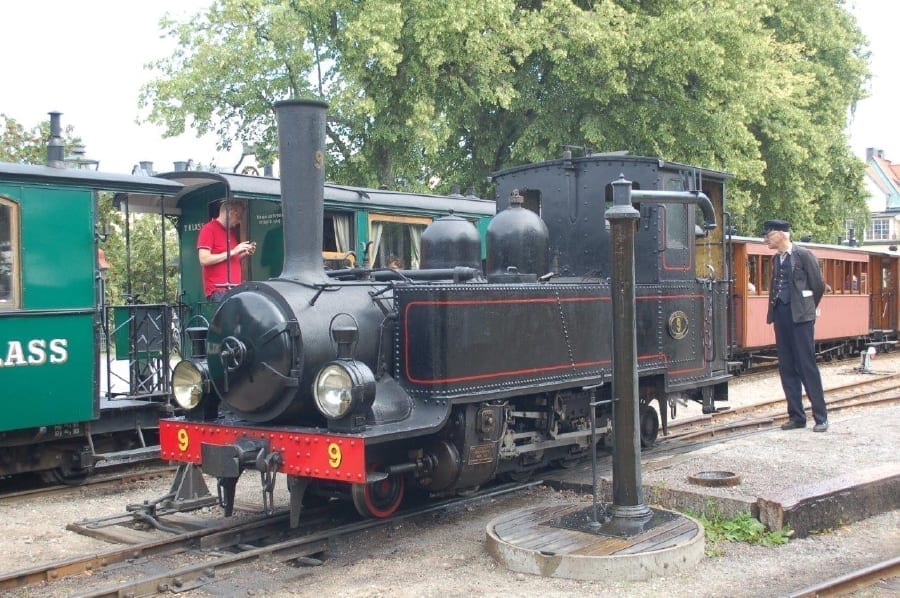 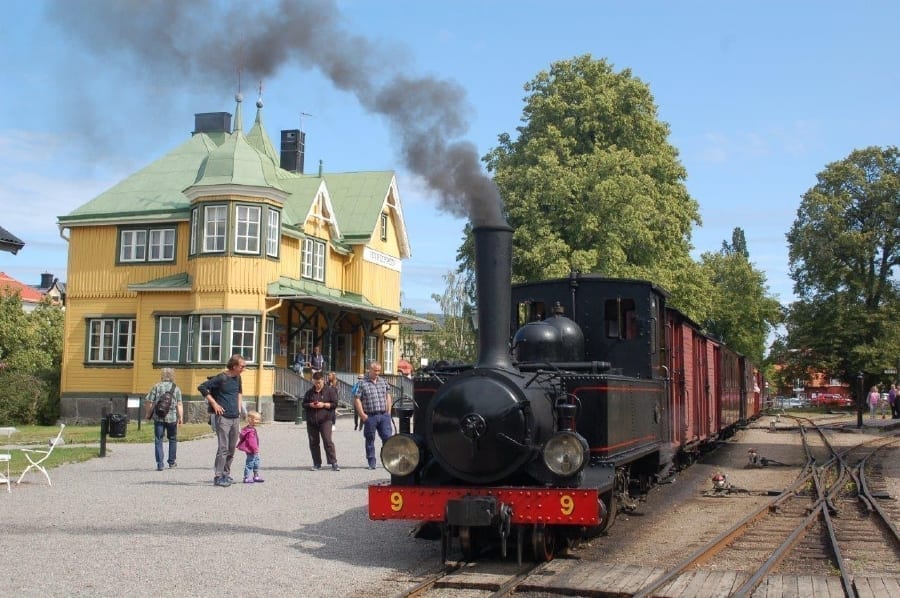 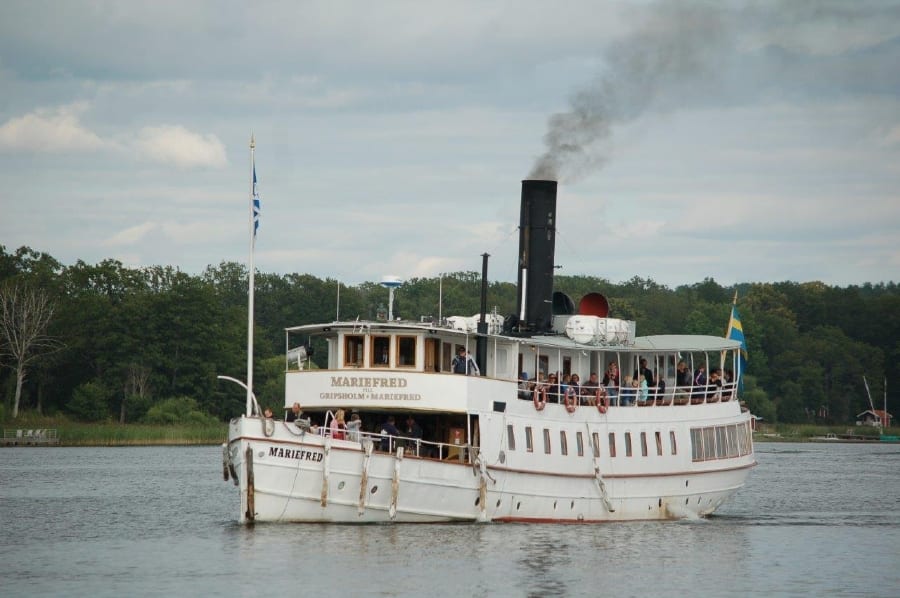 In the coming year, the conventionBaden-Württemberg Railway Fair will take place between 31 July and 9 August, with special emphasis on the cross-border railways in Kehl/Straßburg, Weil/Basel/Saint-Louis as well as Leymen and Mulhouse. A trip on the Waldenburger Railway is also planned; the Schinznach Tree Nursery Railway will also be visited.